Find Article about Topic â€“ ( Positive Space, Negative Space) (20 sentences and reply to the 2 posts with 6 sentence each

1- Please post your responses for the Article (20 sentences or more with websites and/or visual examples) to the article link above Please share what you learned, did not know, how the topic/learning changed your view toward the topic now, and more with classmates.

The art piece called Rubinâ€™s vase accentuates negative space. In the middle of the composition, there is a symmetrical vessel also known as positive or activated space. Representations of people appear on either side of the vase. The curves of the pot create the illusion of a forehead, nose, and mouth. While the negative space itself has no defining traits, the hard edges of the vase. The contrast of the vessel to the rest of the image activates the area and allow your mind to fill in the blanks. The image below is of Rubins vase.

b- When it comes to art positive and negative space are both very important. This space technique is a great way to create balance withing your piece. These make up the composition of the piece, and overall appearance. I tend to think of positive and negative space as black and white for some reason, but that is not always the case. Positive space is what has to do with the subject of the piece. Depending on what you are painting the positive space will be completely different. Negative space is exactly the opposite of positive. While the positive space is the subject/what you draw, negative space is the area around the subject. Study.com says “The term negative space is something of a misnomer. It emphasizes the idea that the viewer constructs his or her own meaning from the image. Negative space is never blank. It is designed to support the foreground of the picture.” Which I found interesting because I would have probably considered negative space “blank” rather than being quite important as a supporting role. There were some cool black and white pieces where if you were seeing black as positive then you would see faces. But if you were seeing the white as positive then the subject became a vase instead of faces. This is an optical illusion known as Rubens Vase. Most optical illusions are just positive and negative space that is creatively placed/balanced in order to draw you eye a certain way. One of the cooler pieces I saw was one that if you look at it one way it is a duck, bu if you look at it another way it is a rabbit. When you see one the other doesn’t go away, but it shifts to the background. 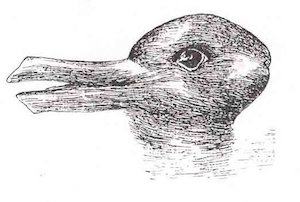